10 of Chet Atkins’ Most Memorable Songs 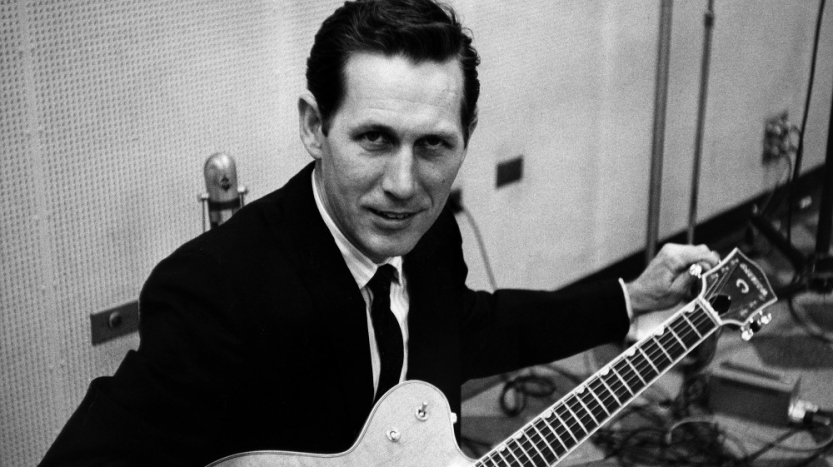 Chet Atkins was one of the most influential guitar players of the 21st century. His legendary career spanned six decades, from the early ’40s to the late ’90s, until his death in 2001. He released a jaw-dropping 88 studio albums, 53 compilation albums, and 113 singles, from country to jazz to folk to numerous other genres in-between. He wooed listeners from generation to generation with his electric speed, melodic playing, and unique finger-picking guitar style. They didn’t call him “Mr. Guitar” for no reason.

Atkins’ signature picking style was inspired by guitar great Merle Travis. Atkins took that style and, over 50 years, made it his own. Some of his other major guitar influences include Django Reinhardt, Les Paul, and Jerry Reed. Rolling Stone ranked Atkins number 21 on their list of “The 100 Greatest Guitarists of All Time.” He was inducted into the Rock & Roll Hall of Fame, the Country Music Hall of Fame and Museum, and the Musicians Hall of Fame and Museum, and has received 14 Grammy Awards as well as the Grammy Lifetime Achievement Award.

Though I don’t like to think of his music as country (though a lot of it was), Chet Atkins is hailed as being the most recorded solo instrumentalist in country music history. Atkins produced records for Elvis Presley, Jim Reeves, Jerry Reed, Waylon Jennings and numerous others. He has collaborated with dozens of artists, probably hundreds, and has released albums with guitar legends, including Hank Snow, Jerry Reed, Les Paul, Merle Travis, Doc Watson, Lenny Breau, Tommy Emmanuel, Mark Knopfler, and Liona Boyd.

Atkins had hundreds of brilliant songs in his repertoire. Many of the songs he recorded are covers, but he picked them in a way no one else could. Here are 10 of Chet Atkins’ Most Memorable Songs

A favorite of Chet’s to play, and a favorite of his fans. The constant boom-chick of his right-hand thumb, the slides and bends, and the simple but badass lead melody all make it a force to be reckoned with. Tommy Emmanuel commonly covers this song in live performances. The song was originally written by John D. Loudermilk.

Wildwood Flower is just a beautiful piece of music to listen to. Watch closely as Chet switches from softly playing chords to subtly ripping it up. It’s an American folk song, covered by many artists, maybe most famously by The Original Carter Family.

Chet loved to play rags. They are, by far, some of the best Atkins songs to listen to. The Entertainer is a 1902 classic piano rag written by Scott Joplin. This one isn’t as fast-paced as many of the other rags Atkins covered, but nonetheless, it’s a great listen. It’s a bit poppy and upbeat, and simultaneously carefully picked.

Chet’s gentle touch on the guitar is often a heartfelt one. Here, he beautifully plays the masterpiece Ava Maria, by Austrian classical composer Schubert. This piece can be found on Atkins’ album Class Guitar.

Chet loved The Beatles. So much so that he released the album Chet Atkins Picks on The Beatles, featuring 12 famous and brilliantly transcribed Beatles’ songs. The album was nominated for Best Instrumental Recording at the 1967 Grammy awards. The sleeve features liner notes by George Harrison. In Atkins’ live performances, he often played a Beatles medley.

Though Stay Tuned wasn’t a hugely popular album, it’s filled with amazing collaborations from songwriters including Mark Knopfler. This track features wicked lead guitar by Steve Lukather (Toto). From funky to jazzy, to rock to country, the album shows many sides of Chet’s playing. It’s a feel-good album and instantly makes you relax. The song “Cosmic Square Dance” won the 1985 Grammy for Best Country Instrumental Performance.

Borsalino is nothing less than a guitar masterpiece. Close your eyes, sway along with the baseline and lead melody and allow it to lull you into a blissful state. Claude Bolling first composed and released it in 1970. Borsalino is the first track on Atkins’ and Tommy Emmanuel’s album, The Day Finger Pickers Took Over the World.

Chet Atkins and Mark Knopfler created some legendary music together. Watching them play live, it was easy to see their respect and affection for each other as they exchange solos. I’ll See You in My Dreams was one of the most popular tracks from the duo’s album, Neck to Neck. The lullaby-of-a-song was written by Isham Jones, with lyrics by Gus Khan, and was published in 1924.

Chet can really make a guitar speak, as you’ll instantly hear in his captivating rendition of Don McLean’s Vincent. There’s not much more to say, really. The track is on the album Me and My Guitar.

Wheels is one of Atkins’ most popular songs. It’s short and sweet; a little romantic, and a little upbeat, and ultimately very easy to listen to. The song was written by the American surf-rock band The Vultures. It can be found on a variety of Chet’s albums.

Which of the Chet Atkins’ Most Memorable Songs is your favorite? Let us know in the comment box below.