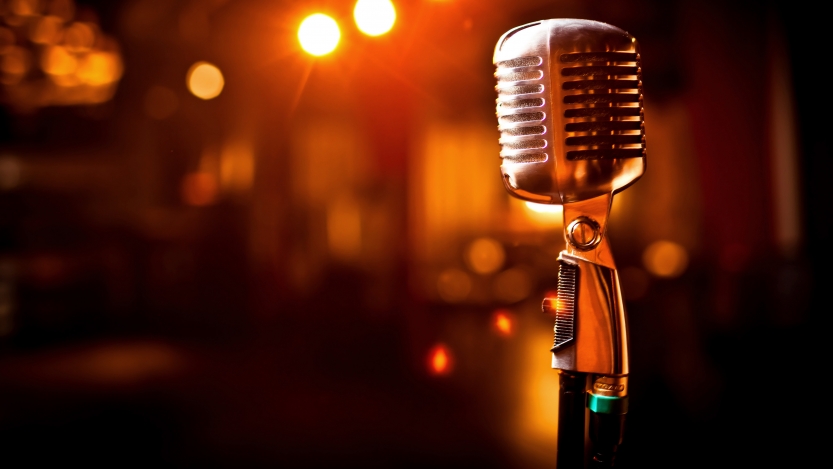 A while back I wrote a blog post about songwriting habits. Most of what I found during my research was a bunch of kumbaya tips about letting inspiration come to you.

Guess what? It’s the same with tips for overcoming stage fright.

Music blogs and experts will write stuff like “think positively“, “get oxygen”, “eat a banana” (yes, really!) and other nonsense. Some even recommend taking beta-blockers – terrible idea.

By going on stage, you’re asking for everyone to stop talking and give you their undivided attention.

They were most likely having a good time, so whatever you’re about to do better be worth it.

In other words: you’re about to be judged.

If you’re a seasoned performer, you’ll be comfortable with making eye-contact with your audience.

It will even make for a better overall performance, as it creates more intimacy and the audience members feel like you’re performing to them personally.

The problem with eye-contact is that it’s easy to lose focus unless you’re running on autopilot like seasoned performers, who’ve played their set a million times, do.

Looking people in the eye makes you focus on their facial expression, which in turn makes you wonder what they’re thinking of you, which makes you lose your cool.

So here’s what you do: find a spot behind the audience and focus there.

Usually, it’ll be the sound guy. Don’t worry about him. If he’s worth his salt, he’ll be busy looking down at the mixer.

The worst thing you can do is look down, because nothing spells amateur hour like a performer staring down the floor.

My man Jay-Z summarized it beautifully in his song Heart of the City:

“I’m not looking at you, I’m looking past you”

Performing involves a lot of different things, especially if you’re a solo artist.

You have to play an instrument, sing the lyrics, do both in time and in tune, look confident, make terrible jokes in between songs, promote yourself, and maybe even move around a bit.

That’s a lot. The more of those things you can do on autopilot, the better.

Unfortunately, there’s no quick fix for this. The only solution is to rehearse your set to death.

Like I wrote in the songwriting habits post, it’s better to do 30 minutes every day than 8 hours the day before your performance.

Eventually, you will be able to rely on muscle-memory and not even think about making a mistake.

Now you can focus on looking good and preparing to crowd surf.

Tip #3: Accept That It Won’t Be Perfect

This tip is not to be confused with “accept that your performance will be a train wreck.”

You want to do well, but it will most likely not sound like it does on the record.

Sometimes you can use this to your advantage and do a more raw version of your song.

But accept that you’ll make some mistakes, and that it’s fine.

Unless you’ve achieved superstar status and the audience knows every word you sing and every note you play, chances are they won’t notice if you slip up.

This doesn’t mean that you should acknowledge your mistake and make a silly joke about it. Save silly jokes for in between the songs.

Every single thing you do on stage is intentional, even if it’s not. The audience won’t know the difference.

Should your entire performance turn out to be a train wreck despite your best intentions, then it’s not the end of the world either.

Fortunately, history rarely remembers losers. You will at most be the butt of a quick joke, and then forgotten before the night is over.

The point is that you have everything to gain, and nothing to lose. So don’t sweat it.