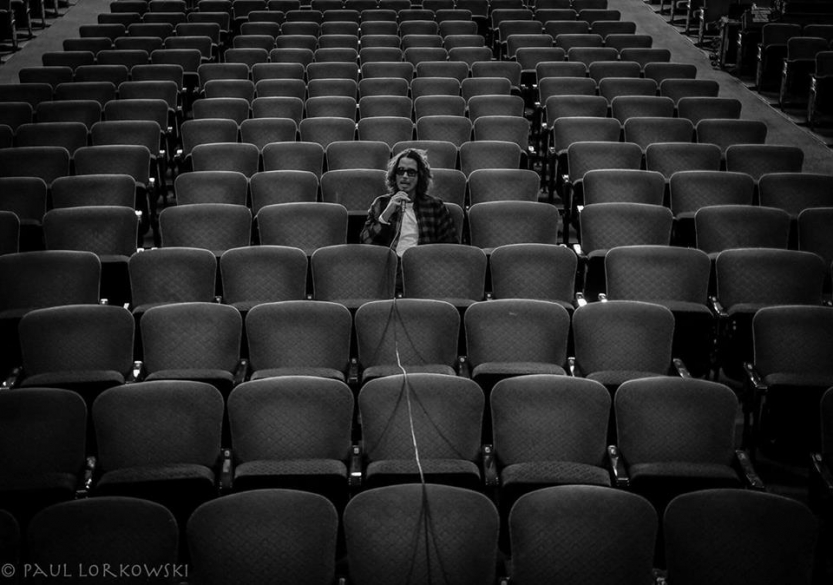 Today marks the one-year anniversary of the death of Chris Cornell. We’re still reeling from the loss of the Soundgarden and Audioslave frontman, who was one of the most enigmatic performers of all time, and had one of the greatest voices of his generation. Cornell was a vocal powerhouse, and could go from soaringly powerful and heartbreakingly emotive in a single vocal performance.

So crank it up loud and salute the late, great Chris Cornell.

Filmed at the apex of grunge-mania at 1992s Pinkpop Festival, this performance finds Soundgarden at the height of their powers, touring behind the monolithic “Badmotorfinger” album. Taken from that record, “Slaves and Bulldozers” has long been a fan favorite, in no small part due to Cornell’s formidable vocal performance, and this live version sees him knocking it into the stratosphere. Incendiary stuff.

Covering John Lennon’s “Imagine” is a mean feat, but Cornell doesn’t just do it justice, he totally makes it his own. Just the man and his guitar, his soulful vocal performance is stark, bold and completely captivating. Cornell could rock out with the best of them, but that voice could completely captivate a room all on its own.

“War Pigs” – Temple of the Dog

Filmed during Temple of the Dog’s reunion run in 2015, this video sees the band cutting loose on Black Sabbath’s seminal “War Pigs.” Cornell completely channels Ozzy Osbourne’s raw, impassioned vocal from the original record and the results are a huge, dynamic display of vocal prowess. You can see how much fun he’s having tearing this one up, and the vocals shine as a result.

Originally performed as a duet with Pearl Jam front man Eddie Vedder in the band Temple of the Dog, this live version sees Chris Cornell team up with another sadly departed vocal legend – Linkin Park’s Chester Bennington. Two amazing vocal performances and some incredible harmonies – it’s testament to how great the pair were, and just how much they will be missed.

Nothing Compares 2 U – Chris Cornell

Written by Prince, made famous by Sinead O’ Connor, “Nothing Compares 2 U” was a bold cover choice on which lesser artists could have faltered. But, Cornell’s introspective vocal performance captivates from the first bar here. Pain, heart, soul – Cornell runs the full emotional gamut in five minutes in the way that only he really could. It’s “stop you in your tracks, hair stands up on the back of your neck” stuff, and a fitting way to round out this playlist.

R.I.P Chris Cornell. Thank you for the music.

END_OF_DOCUMENT_TOKEN_TO_BE_REPLACED

John Lennon was one of the most beloved songwriters of his generation and was taken from us way too soon. END_OF_DOCUMENT_TOKEN_TO_BE_REPLACED

It is quite hard to pick the best 8 Willie Nelson songs. He is such a prolific writer and has written a myriad of great songs over his long career. END_OF_DOCUMENT_TOKEN_TO_BE_REPLACED

These four interesting facts about sting give us some insight into the life of this celebrated musician. END_OF_DOCUMENT_TOKEN_TO_BE_REPLACED

These five interesting facts about Van Halen partly reveal a musician that was quite extraordinary. END_OF_DOCUMENT_TOKEN_TO_BE_REPLACED

These five facts about jazz guitar legend Pat Metheny are quite impressive. They will shed some light on how a guitar prodigy from a small town in Missouri became the most successful and beloved jazz musician of his generation. END_OF_DOCUMENT_TOKEN_TO_BE_REPLACED

You know the saying: “Give people their flowers while they can smell them” so, in this post, we’re going to look through some of the greatest jazz guitarists playing today… END_OF_DOCUMENT_TOKEN_TO_BE_REPLACED

To show our appreciation of your love and loyalty to our products, and to give a little something back to you, we created END_OF_DOCUMENT_TOKEN_TO_BE_REPLACED

These 5 facts about Guns N’ Roses can help us understand why they became one of the biggest rock bands ever. END_OF_DOCUMENT_TOKEN_TO_BE_REPLACED

These 7 facts about Jimi Hendrix partially show why he is such a massive influence on guitar players. They also reveal a very unique career that is impossible to be duplicated. END_OF_DOCUMENT_TOKEN_TO_BE_REPLACED

END_OF_DOCUMENT_TOKEN_TO_BE_REPLACED

We recently covered how different kinds of arthritis can affect your guitar playing. We also provided some tips on how to avoid it. END_OF_DOCUMENT_TOKEN_TO_BE_REPLACED