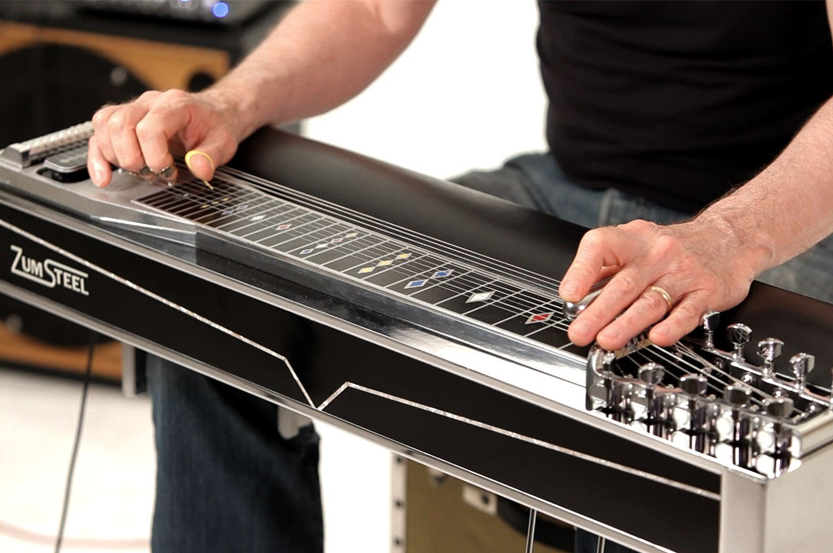 Remember the electric hurdy-gurdy? Here’s another one of those. If you know your country music you will already know that the pedal steel guitar is like a steel guitar, but with bells and whistles (not literally – it does have pedals and levers, though).

So why is this interesting? Because, my friend, the humble lap steel guitar not only set the wheels in motion for the guitar amplifier you’re probably using; but also led to the creation of a cool instrument that changed country as a genre.

Long ago, on an island far away…

In the 19th century, Spanish sailors introduced native Hawaiians to their Spanish guitar, thinking it would go down well. Hawaiians, however, thought it was too moody and complicated for their taste; so they tuned it to play major chords. And, laid the guitar across their lap to make it easier to play. It turned out to be a hit in the US; and soon manufacturers mass-produced the Hawaiian version of the Spanish guitar.

The problem with the early version of the lap steel guitar was that it wasn’t quite loud enough to compete with instruments like brass and drums. George Beauchamp made it his mission to amplify the lap steel guitar, and together with violin repairmen John and Rudy Dopyera he managed to put a horn on it. So far, so good.

The partnership ended, however, and Beauchamp teamed up with engineer Adolph Rickenbacker to create… a frying pan. But check this out – because the A22 Frying Pan needed an amplifier to work, you can thank Mr. Beauchamp and Mr. Rickenbacker for starting the rock revolution.

From lap steel to console steel to pedal steel

Lap steel guitars had a regular guitar shape; until manufacturers caught onto the fact that this shape was a bit redundant now that it was in the lap of players. It was soon crafted in a rectangular shape instead – this made a bit more sense.

The next issue was that lap steel players wanted more versatility, so a clever cookie decided to add on an extra neck tuned differently. Two necks quickly became four; and the lap steel guitar became so heavy it needed its own stand – enter the console steel guitar.

Now the problem was affordability: too many necks, not enough cash. Because many players were unable to purchase the multi-necked wonder, several inventors (including Paul Bigsby) came up with the idea of installing a pedal that simply changed the pitch of the strings.

Musicians are known for breaking the rules, and Bud Isaacs decided to do just that when he pushed the pedal while notes were still sounding. Rather than the world ending, Bud Isaacs started a new trend in country music: pitch bending.

Another pioneer was Zane Beck, the guy we can thank for introducing knee levers to the pedal (pedalever?) steel guitar. Similar to the pedals; the levers can control the pitch of the guitar and can be used either on their own or in combination with each other.

Want to make your own? Always an option – check the video below to see how! With the bells and whistles (pedals and levers), you’d probably be best off using a Roadie3 to make sure your pedal steel guitar sounds crisp!