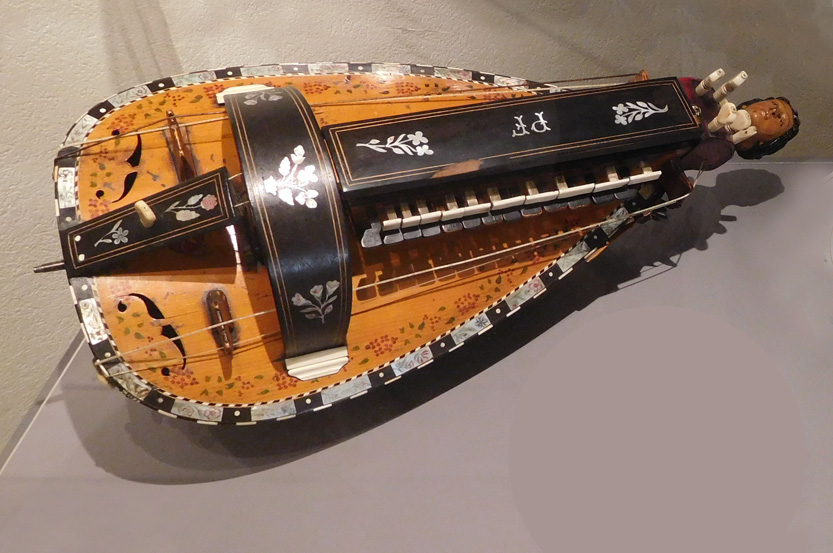 ;If you frequent European folk festivals, or have just been binge-watching Black Sails, you already know about the hurdy-gurdy – a stringed instrument that looks like a steam-punk violin and sounds like a bagpipe.

But what use is a hurdy-gurdy if your band consists of neither folk musicians nor pirates? Good question! If you are looking for something exotic, unique and versatile for your music production sessions, the hurdy-gurdy is not a bad bet at all.

Black Sails composer Bear McCreary explains how he crafted the catchy theme tune that impressed the show’s producer with everything from wailing bagpipes, to deep undulating drone sounds, buzzing saws and ticking percussion – all made by the same instrument.

What if I just want to rock out?

By now you’re probably thinking “This is all well and good, but is this thing any good for shredding?”

The answer is yes.

Adding a bit of modern technology to the 1000-year-old instrument, French musician Guilhem Desq shows you how easy it could be added to your current rock or metal setup.

When I showed this video to my better half, she remarked that “He looks so smug when he’s playing it… and with that sound, he has every right to.”

Take a look at some hurdy-gurdy shredding magic below, and I’m sure you’ll agree:

Flying solo with the hurdy-gurdy

Don’t have a band to complement your shredding, or do you just want to get even more creative? No worries – Guilhem Desq has got you covered.

By adding a sampler and a loop station, which you probably already have in your arsenal; you can quickly become a one-man band with your hurdy-gurdy.

Watch how you can utilize all the different sounds; add in external samples triggered by the lower drone strings, and layer it all to create a mesmerising soundscape.

(Skip to the two-minute mark for the heavy guitar samples.)

You can find this amazing instrument in several online music stores; but there are many ways to skin a cat – and many ways to get your hands on a hurdy-gurdy.

Fans of the hurdy-gurdy have put together guides on how to build your own for as little as $20 or how to convert a guitar into a hurdy-gurdy – and you can of course also buy a self-assembly kit.

Watch a TED Talk by Caroline Phillips on how to get started playing the hurdy-gurdy, even if you’re a complete beginner.

As for tuning? A user remarked on a music forum: “The hurdy-gurdy – a minute to play, a lifetime to tune.”

Finally, If a lifetime sounds a bit long for tuning your hurdy-gurdy, maybe the Roadie 2 can solve that problem?