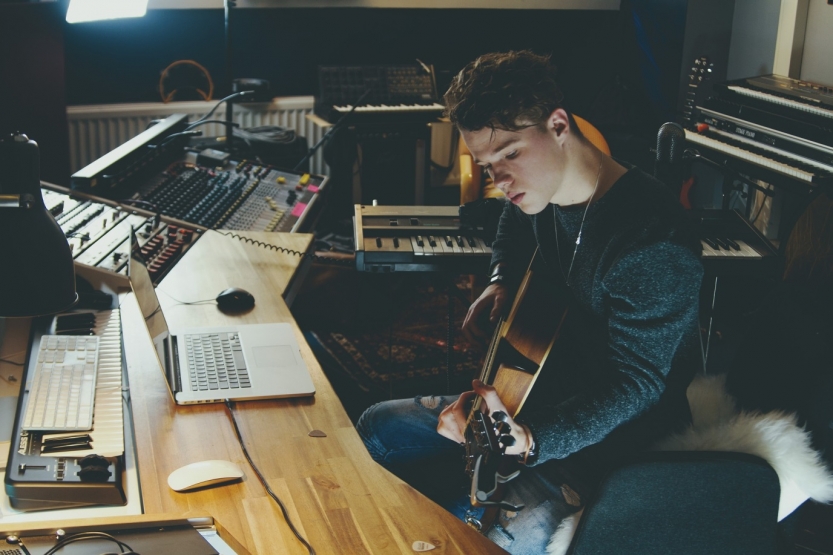 Before writing this article, I did some research on the habits of great songwriters. You know what I found? Not a whole lot.

It never ceases to amaze me that songwriters who’ve penned incredibly profound and emotional lyrics suddenly are completely unable to articulate themselves when they’re asked how they do it.

I could of course regurgitate some wishy-washy quotes from 25 Great Songwriters on the Art of Songwriting, and let you think that songwriting is something mysterious that requires you to balance your meridian system and channel your chakras.

But you deserve better. So below you’ll find three of my personal habits for writing songs, learned and adapted from years of painful experience.

Chain that muse to your desk

Barbara Kingsolver was right. Take it from someone who has struggled with writer’s block time and again. All creative people have an inner critic whose job it is to make sure we don’t embarrass ourselves. That’s cool and all, except for when it moderates our ideas into oblivion.

Some will say that you have to wait until you’re inspired. You could also wait until you find money in the street – but getting to work is a much, much safer bet. I view the concept of “getting inspired” the same way I view luck: the harder you work, the luckier (and more inspired) you get.

The inner critic that kills your creativity has its uses – but those uses are best saved for later in the process. What you should get in the habit of is to just let it flow. Sounds too easy? That’s because it is. Most of what will flow will be sewage. Don’t take it from me – I stole the analogy from Ed Sheeran.

Once enough sewage has flowed out of the dirty tap that is your imagination, you send in your inner critic with a sieve to pick out the gems. It might be ten gems hidden in the garbage, or it might be just one. But you’ve managed to produce something, even if it’s small, that you can be proud of.

First, they ignore you, then they laugh at you, then they fight you, then you win. Do you think anyone liked that Igor Stravinsky used dissonant sounds in his music? No. But his daring experimentation revolutionized music nonetheless.

Back in the day, brass players tried to play their instruments like singers sang. Louis Armstrong decided to do the opposite: he sang like he played the trumpet. That was weird. And it totally worked for him.

Feedback from guitars sounds terrible. Except when Jimi Hendrix is the one doing it, and doing it on purpose. Then it creates cultural waves, and inspires a whole generation of guitarists trying to do just that.

Yodelling isn’t cool. It’s something you do in Lederhosen, which also aren’t cool. That’s why yodellers wear their Lederhosen yodel in the Alps, where no one can hear them or see them. But when Jimmie Rodgers incorporated yodelling into country music… guess what?

What I’m trying to get at here is that in order to create something new and fresh, you have to get into the habit of doing weird things. Do enough weird things, and maybe you too can one day create a beat from a pencil and a plastic cup like Timbaland.

“Practice makes perfect”. Yes, thank you, we know. But not all forms of practice are equal. Becoming a good songwriter is a bit like dieting – skipping days will be your downfall, and you can’t make up for the week by starving yourself last minute.

Similarly, you shouldn’t get all your “songwriting hours” in all at once. It’s better to practice for 30-60 minutes every day than trying to cram in hours of practice before your gig. Getting into a routine will help you in the long term, even if it doesn’t seem so at first.

Again, you don’t have to take my word for it – Jocko Willink is a former Navy SEAL, and he knows the deal. Practicing regularly, and without fear of failure, uses the same concept as letting the dirty tap flow when you write or compose: even if it’s garbage, you are still doing it.

But what if your schedule is so hectic that you only have Sunday afternoons to pursue your craft? BS. You can sing in the shower. You can practice chords when you watch TV. You can practice freestyling in your head during your commute.

There will be moments throughout the day where you can get your time in – and if you’ll excuse me, I’m off to do some songwriting of my own.

These 13 tools and tips for playing guitar with arthritis can help you immensely. It is no secret that arthritis can affect your guitar playing; END_OF_DOCUMENT_TOKEN_TO_BE_REPLACED