6 Musicians Who Play More Than One Instrument 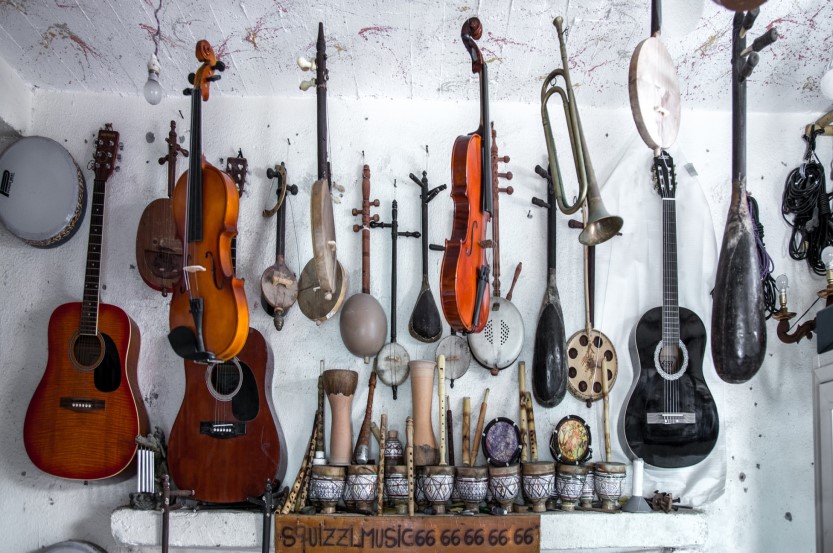 While some people spend decades trying to master only one instrument, these people managed to master a dozen in the same amount of time.

Today, we are counting down 6 musicians who play multiple instruments. Some you already know about and others may surprise you.

Trent Reznor is known as the brain of Nine Inch Nails, one of the most critically acclaimed bands in recent music history. He’s broken new grounds in many areas and he’s the only famous musician we know that plays a swarmatron, a synth that can play 8 different oscillators at the same time.

Plays more than 10 instruments, including keyboards, guitar, trumpet, and of course, bass guitar.

Even though many people seem to be unaware of it – possibly because of his distinct look and on-stage antics – Red Hot Chili Peppers’ Flea is an extremely talented musician. He started his music career in middle school, playing trumpet in a jazz band. He picked up bass later in high school.

Beck plays 12 instruments, including guitar, banjo, sitar, and drums, to name a few.

Beck is considered to be one of the most influential indie artists in the last three decades. Beck’s work encompasses everything from country and folk to hip hop and alternative rock. His seminal album Odelay helped shape a generation of out-of-left-field pop artists.

More than 20 instruments, including flute, saxophone, guitar, accordion, and oboe.

Stevens is a singer-songwriter that has been dominating the indie scene with his genre-bending albums for two decades at this point. His most famous albums are based around the states of Illinois and Michigan. The liner notes for the latter credit him for 27 instruments (some of them jokingly).

These days, more people know about Brian Jones’ mysterious death than about his talent. The original leader of the Rolling Stones played multiple instruments both live in concert and on studio recordings. He was also possibly the first musician to bring folk instruments into rock and roll.

As far as we know for sure, 27 instruments, including synthesizer, guitar, harmonica, and percussion.

All of the artists on the list are impressive in their own right but Prince was something else. He’s the single most talented musician of the 20th century. On his debut album, he played 27 instruments. He’s also credited for all the vocals, writing, and production on the album. And that was just his debut album, over the next four decades, we can safely assume that he learned another instrument or two.

What do you think about our top picks? Do you feel we got it right or did we miss out on someone important? Who’s your favorite multi-instrumentalist? Share your thoughts with the rest of us in the comment section below.

Today we’re going to talk about 5 ways musicians get inspired. The term inspiration refers to being mentally stimulated to do something, especially in the creative realm. END_OF_DOCUMENT_TOKEN_TO_BE_REPLACED

We recently covered how different kinds of arthritis can affect your guitar playing. We also provided some tips on how to avoid it. END_OF_DOCUMENT_TOKEN_TO_BE_REPLACED

Johnny Cash, one of country music’s most influential singers sadly passed away in 2003; His words and music live on, continuing to have a profound effect on listeners. END_OF_DOCUMENT_TOKEN_TO_BE_REPLACED

Wondering what are the 5 most covered songs of all time? Spoiler alert! They’re not the ones you would think. END_OF_DOCUMENT_TOKEN_TO_BE_REPLACED

END_OF_DOCUMENT_TOKEN_TO_BE_REPLACED

These 4 legendary recording studios that are active today have survived a plethora of adversities. END_OF_DOCUMENT_TOKEN_TO_BE_REPLACED

These 5 hit songs disliked by their songwriters are a true study into human nature. You wrote a song, it became a massive hit, and now you hate it? That’s right! It happens more often than you’d think. END_OF_DOCUMENT_TOKEN_TO_BE_REPLACED

The top 5 young guitar players today seem to defy the odds. You need a lot of time to get really good at something like playing an instrument. END_OF_DOCUMENT_TOKEN_TO_BE_REPLACED

These 5 inspirational books for musicians can be considered modern classics. They are a fantastic resource to feed our drive and keep us inspired. END_OF_DOCUMENT_TOKEN_TO_BE_REPLACED

The 5 jazz albums every music fan should have are a collection of incredible music by incredible artists. These records marked a moment in history and continue to inspire generations of music lovers across the globe. END_OF_DOCUMENT_TOKEN_TO_BE_REPLACED

It is quite hard to pick just 5 records every guitar player should know. Truth be told, these 5 albums should be known by anybody who enjoys music. END_OF_DOCUMENT_TOKEN_TO_BE_REPLACED