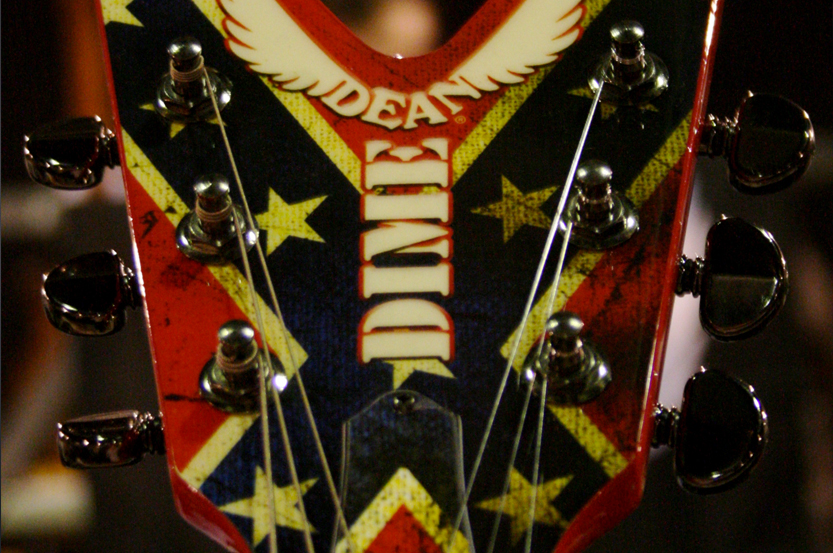 15 years ago, the guitar world lost a legend. On December 8th 2004, a crazed fan killed Dimebag Darrell onstage. Metal has never been the same since.

With his signature Dean guitar in hand, Dime was an icon. And, for anyone determined to learn metal guitar, mastering his licks has proved a right of passage.

Today, we’re remembering Dime with some of our favorite Pantera live performances. If you’re looking for a heavy metal guitar lesson, studying these clips is a pretty good place to start.

Pantera’s 1991 concert dates were the stuff from legend, and truly what put the band on the metal map. As Judas Priest frontman Rob Halford – who had Pantera open for Priest that year –  recalls:

“They would just win an audience over in 30, 40 minutes. From playing fresh, new music that nobody had heard before. The communication was instant with that band.”

That instant communication is on full display during this performance of “Cowboys From Hell” in Moscow, 1991. Dime is an absolute machine on this one, and his searing riffing and fiery lead lines showcase both his flair and undeniable musicality.

A monolithic song, made even more monolithic by a soaring, impromptu solo from Dimebag at the beginning. This one showcases Dime’s love of alternate tunings and, as Guitar World notes, is tuned down a whole step – a quarter step flat:

“Dimebag also experimented with “drop D” tuning on Cowboys From Hell (C# plus 40 cents), but later become a fan of tuning the entire guitar down a whole step, beginning with A Vulgar Display of Power. This tuning (D,G,C,F,A,D-a quarter step flat) was used extensively on “Walk” and “A New Level.” Further use of this tuning was used on Far Beyond Driven (“Becoming,” “I’m Broken,” “5 Minutes Alone,” etc.), and by Reinventing the Steel it was Dime’s main “standard” tuning.”

It’s a tuning that has confounded aspiring groove metal shredders for decades now. Fortunately, it’s super easy to save it a preset in your Roadie 2.

Dime wrote so many classic riffs while in Pantera, it’s almost overwhelming. But, if you were to pick one riff that summed up the might of the man, it’d have to be this one. It’s a brutal bulldozer that catches you from the first note.

“Dimebag’s riff was simple and direct and probably the most powerful thing he ever wrote. As heavy as it is, the main riff to “Walk” is actually very catchy which helps give it it’s lasting appeal to metal fans all over the world.”

Another absolute MONSTER of a riff from the “Vulgar Display of Power” album. What makes this one so good? As the man himself once explained to Guitar World:

“Sliding from one power chord to another can help a riff sound more sinister. I got the idea from listening to Tony Iommi in Black Sabbath, and I do it a lot-check out “Mouth For War,” for instance. So, if I wanted to make a riff nastier, I’d throw in a chord-slide and probably a chord-bend as well.

It could have been any live version of “Cemetery Gates” on this list. They’re pretty much all great. But, the solo that kicks in here at 4:38 is pretty magical.

What’s your favorite Dimebag Darrell moment? Tell us in the comments.